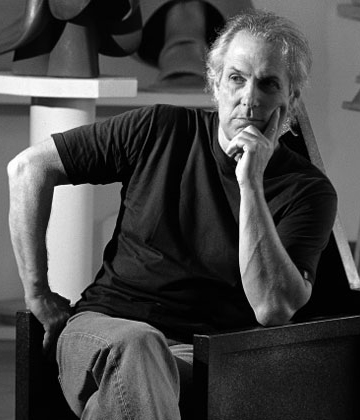 Maurizio D’Agostini was born in Vicenza on 3rd February 1946.  At fourteen he abandoned his normal subjects and attended engraving, repoussage and drawing courses at the Vicenza Arts and Trades School for four years. During these years he learns about the rudiments of jewellery decoration, in particular ornamental drawing.

After having chosen the road of “on site” experience, he completes his apprenticeship as an engraver under the guide of traditional artisan masters from Vicenza.  It is thanks to this fundamental journey between different schools that his hand became more sure, and this permitted him to improve his burin engraving technique.

The closed artisan mind that is jealous of its personal secrets represents an ever increasing oppressive bond from which D’Agostini desired to free himself in order to seek out new forms of expression.

Between 1967 and 1968 he frequented the painting courses of the artist Otello De Maria at the Vicenza Arts and Trades School, an interesting occasion which allowed him to look beyond the boundaries of goldsmith artisanship.  In 1969 he opened an engraving and chiselling laboratory.  With this economic and creative independence, he could now deepen his research into artisanship and art.  While being a maestro to some young apprentices, his attention moved decisively towards the world of copperplate engraving. He burin engraved numerous silver sheets and, with a series of copperplate engravings produced in a limited edition by the Stamperia d’Arte Busato of Vicenza, became successful thanks to the city art collectors.

A Vicenza exhibition held in 1978 at Studio Pozzan united the works of this decade – silver and copperplate engravings – demonstrated how the burin had become D’Agostini’s main instrument of expression.  Indeed, the artist began creating his first sculptures with the burin, with small sculpted stones accompanying the contemporary research on terracotta modelling.

The years between 1969 and 1975 were a fundamental experience which accompanied and justified this creative awakening. D’Agostini acted with the “Gli Istrioni” threatre group directed by Otello Cazzola. The theatre, the stage, the reflection of Molière, Shakespeare, Goldoni, Tennessee Williams and Edward Albee through body and voice allow the artist to understand his true potentialities, while the severity of the maestro-director transmits a rigorosity and discipline to him that characterise his subsequent expressions. The adventure with theatre ended in the middle of the 70’s because D’Agostini’s road was a material one, but the artist never stopped reflecting on a possible union between actors, scenery and sculpture…

From 1977 to 1979 D’Agostini taught burin engraving at night classes held at the Vicenza Art and Trade School. His work as an artist started being appreciated thanks to the personal exhibitions he himself held and the collective ones in which he participated.

During the first three months of 1982 he travelled throughout the United States, stopping for a period on the island of Assateague in Maryland. The island is a natural park in which horses that descended from Spanish examples, remainders of a shipwreck that occurred three centuries ago, live wild. This place, full of suggestion, represented a very important part of D’Agostini’s road. The incision entitled La conchiglia di Assateague (The Assateague Shell, 1982) was donated to the island museum and opened a fertile creative season during which even sculptures and bronzes acquired full force.

In 1984 he met the French writer Léo Gantelet, who invited him to exhibit in Annecy.  This exhibition was the starting point for a series of exhibitions in numerous French and Swiss cities (Annecy, Grenoble, Geneva, Friburg, Renans, Montreaux, Honfleur, Deauville) and long stays in High Savoia, Provence, Brittany and Normandy. During these stays the artist decorated some ateliers in order to sculpt the local stones.

In 1987 he held a burin incision course at the International Graphic Centre of Venice, in which he collaborates also by creating some engraving tablets.  Thanks to his friend Orazion Parisotto (Emile Noel Prize, 1990, Brussels), founder of UNPAX (World Peace Union), he created the engraving L’albero della vita (The tree of life, 1987), an image-symbol of the sixth edition of a competition sponsored by RAI, and called “I giovani incontrano l’Europa” (Young people meet Europe).

An interesting artistic relationship with Carlo Moretti, a Milan architect, began with the resulting sculpture Il cavaliere del futuro (The futuristic knight, 1988), created for Palazzo Lares in Vicenza. This was followed by a fountain for Galleria Crispi in Vicenza. Characterised by the attention the artist was giving to large dimension sculptures, these works were supported by the “Futura Progetti” of Vicenza, a promoter of works that unite architecture with sculpting.

The years from 1991 to 1997 were extremely productive and full of important contacts and public relations.

After the important exhibition in the Napoleonic Archives of Vicenza, the following works were commissioned: Il sovrano dell’isola (The king of the island, 1991), La casa del vento (The house of the wind, 1992), Elevazione (Elevation, 1992), L’astonomo (The astronomer, 1994), L’annunziatore (The announcer, 1996), L’educazione dell’anima (Educating the soul, 1997), Il nocchiero (The helmsman, 1997). All these works were made using stone coming from the San Gottardo and San Germano peaks of the Berici hills.

D’Agostini dedicated 1994 to “Brenta stones”.  Of the one hundred bowls that he sculpted, fifty were created in the Honfleur atelier in Normandy. This is the reason for their French titles, just one way of honouring a place and region greatly loved by the artist. Over the years, D’Agostini went to collect the stones from the exposed sections of the river bed, selecting them carefully one by one. This “treasure hunt” always occurred during the first light of day and following an almost sacred ritual.

The hundred small works were commissioned by Giuseppe Calgaro, a great friend and patron of the artist and also president of Balestra, a very old and very famous goldsmithery situated in Bassano del Grappa. The “Stones” are immortalised in L’oro del Brenta (Brenta gold), a splendid book in three languages edited by Balestra, with poetic texts by Luca Goldoni and beautiful images by Fabio Santagiuliana. Even though a limited edition, the book crossed the Italian border and touched other countries.

Important exhibitions were held during those years, organised and sponsored by the Italian Cultural Institutes in Mont- reaux, Switzerland (1991), Lyon in France (1993), and even before in Seynod (1991) near Annecy. The Seynod town hall acquired a very important work, Cursum Perficio (1990), a sculpture made from the muscatel stone coming from Costozza dei Berici. This work was then placed in the cerimonial hall of the Hotel de Ville. D’Agostini found notable success during a period of long stays on the other side of the Alps. He considers France his adoptive country, he made deep ties and strong friendships there that consolidated through time, things which became important for his artistic and creative future. 1997 closed with the great retrospective at Villa Cordellina Lombardi in Montecchio Maggiore: fifty sculptures and seventy drawings. Financed and created by the Vicenza Province Cultural council, and decorated following a design of the architect Giovanni Galla, the exhibition was a great success for the public and the critics.

Year 1998 also started with an important exhibition, held in the headquarters of the “Le manoir de Cologny” cultural association in the hills of Geneva. On that occasion Pourquoi – Perché (Why), a collection of thirty works by the poet Léo Gantelet was presented, interpreted by the same number of D’Agostini pastels.  It was a wonderful publication (Editions du Choucas) created by two pairs of hands, the fruit of a long-standing friendship and profound intellectual complicity. As well as the book, this creative combination also transformed itself into a travelling show with original music, reciting voices and projections of the pictures on the screen.

The pièce made its début in December 1997, at the Canneti Auditorium in Vicenza, in collaboration with the Twinning Minister (Vicenza-Annecy). The other performances were held at the Galerie Bagnorea in Annecy, France, and in the “La Valletta, chez Ruttimann” property at Territet in Switzerland. Upon its return to Italy, the show was promoted by the Arzignano branch of the Lions Club, and performed at the Hotel Michelangelo in Vicenza.  It then moved to the Berici hills in Villa di Montruglio (Pigafetta-Camerini), where it was enriched with the special contribution of the dancer and choreographer Thierry Parmentier.

The years going from 2000 to 2004 untiringly deepened fundamental points for human beings: the internal world, relationships with nature, a glance towards the universe. This research was continually nourished by a dialectic confrontation between spirit and material, between the attempt to fathom the dark abysses of interiority and the commitment towards a rigorous exercising of rationalty, between elaboration of the concrete experiences of life and the longing to reveal the mysteries of the universe. The following works arose from these ideals: Il silenzio (The silence, 2000), Volo cosmico (Universal flight, 2001), Il trionfo dell’Alba (The triumph of sunrise, 2001), L’uomo cosmico (Cosmic man, 2001), Il navigatore solitario (The solitary navigator, 2001), L’uomo che si legge la mano (A man reading his own hand, 2001), Nascita dell’uomo cosmico (The birth of cosmic man, 2001), Il re e la regina (The king and queen, 2002), Nascita di Venere (The birth of Venus, 2002), Saturno (Saturn, 2002), Zeus (2002), Sekhmet (2002), La regina (The queen, 2004), and Lighea (2004). These sculptures inaugurate a new creative phase – from this moment onwards the artist began painting his works with oil and acrylic paints, just like the ancient people used to do.

During this period, D’Agostini exhibited in France, in the Casino Royal of Evian and in the Silvie Platini Art Gallery in Veyrier du Lac. The last great exhibition of the artist goes back to 2002. Prepared partly in the Palazzo Antico Ghetto and partly in the Chiostro del Beato Luca Belludi, inside the Basilica of Saint Anthony in Padua, it was financed and promoted by the Culture office of Padua Province, with the determining approval of the Town councillor Vera Slepoj, a great admirer of the works of D’Agostini. From 2002 the artist was given the task of making the bronze statues destined for the winners of the annual culture prize, awarded by the Paduan province.

Maurizio D’Agostini still lives in his house-studio at the feet of the Berici hills in Costozza, a tiny burough rich in history and beauty that is surrounded by green lands. He continues his thorough research into art and the existence of human beings by studying and working on his material here every day.